Some Things to Talk About : Speaking about your Book and Yourself 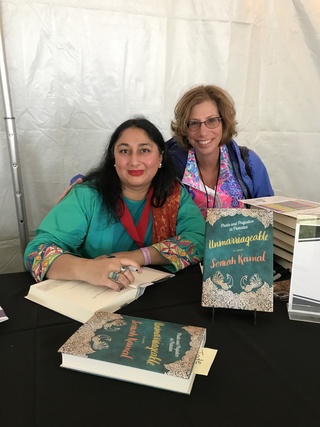 Soniah Kamal and Jode at the 12th Savannah Book Festival (2019) Click on photo her TEDX talk.

For me, Savannah, Georgia is a magical city. With the Spanish Moss dripping from the gnarly live oaks hanging over the antebellum mansions, fountains and charming squares, you can't help but feel that you're in a ghost story.
On Saturday, February 16, 2019, Savannah was bursting with stories and attending the 12th Annual Savannah Book Fest to hear those stories was a treat. With over forty nationally recognized authors to choose from, it was challenging to select my itinerary for the day. This year, I decided upon three debut fiction authors and one perennial bestseller with one particular goal in mind. While I was certainly interested whatthey had to say about their novels, I was more interested in howthey made their presentations.
As I stand on the threshold of launching my own book tour for my debut novel, "The Midnight Call", on June 18th, I wanted to see how the pros did it. I wanted to learn from their strengths and weaknesses, and pass it on to other writers traveling the same exciting path.
My day began with Mira T. Lee, whose hands trembled as she candidly spoke about the moving inspiration for her novel, "Everything is Beautiful" – her mother's death and a family member's struggle with mental health. The narrative is a complicated, multi-cultural examination of how a young woman's mental health crisis can impact the entire family. Ms. Lee spoke from the heart and as an advocate to de-stigmatize mental illness. It took great nerve for her to emotionally open herself to a group of strangers and Ms. Lee deserves credit for her honesty in speech and on the page.
Dr. Delia Owens is a well-respected naturalist who has spent decades studying wildlife in the African wilderness. She is a woman who was brought up roaming the marshes of Georgia and has spent most of her adult life with minimal human contact. She said that she felt more at ease with hyenas than humans. Comfortable with lecturing about her scientific studies, Dr. Owen was shy about discussing her debut novel "Where the Crawdads Sing," which has become a New York Times #1 Bestseller and has been optioned by Reese Witherspoon's Hello Sunshine. It's a coming-of-age story about a girl who's abandoned by her parents and wanders the North Carolina marshes, and who becomes the suspect in the murder of a popular teenage boy. Dr. Owens revealed her own profound loneliness and isolation, and how the novel served as a connection between her naturalist and fantasy worlds.
By far, my favorite presentation of the day was by Soniah Kamal, who has rewritten Jane Austin's "Pride and Prejudice" set in her birth country of Pakistan. "Unmarriageable" is the fulfillment of her life-long obsession with Austin's novel, as in Ms. Kamal's mind, there is a dynamic parallel between the patriarchal societies of contemporary Pakistan and 19th Century England. Women must get married and marry well. Ms. Kamal has lived and traveled around the globe, and tears filled her eyes when she spoke of the novel's importance to her life, her family, her culture and the stability she now finds at home in Georgia.
I was truly charmed by Ms. Kamal, her earnestness and embarrassment over the acclaim and attention that her novel and her Ted-X talk have brought her. In fact, I felt compelled to give her a hug of reassurance after her speech.
The long day wrapped up with a real pro-Patti Callahan Henry, who's written fifteen best-selling novels. "Becoming Mrs. Lewis" is her first foray into historical fiction. Ms. Callahan Henry spoke with great fervor and passion about her exhaustive research into the life of Joy Davidson, the wife and collaborator of C. S. Lewis. Her book is a celebration of the talented and short-lived Joy Davidson Lewis, and has been recognized by Mrs. Lewis's son as an accurate depiction of his parents.
The style of each author's presentation was as unique as her novel. However, I composed a list of the important common threads that serve as my take away from the day's festivities. They are a succinct guide to keeping an audience on the edge of their seats.
1.     Give your personal history. Who are you? Where were you born? Are there any relevant anecdotes about your family?
2.     State your motivation/inspiration for writing your novel. Why is this particular story deeply personal to you?
3.     Describe the themes in your book. What universal lessons and truth are communicated in your story?
4.     Elaborate on your research. Did you go somewhere unusual to gather your character's backstory? Did you become an expert on a certain topic before fleshing out your plot?
5.     Discuss your writing process. How long did it take? Did you outline or write by the seat of your pants? Did you work in alone or participate in a writing group?
6.     Introduce your characters, plot, setting and the points-of-view. Spark your potential readers interest in the people and world you've created.
7.     Be honest. Speak from the heart. Don't fake it. The audience will sense your insincerity.
8.     Communicate your excitement about your novel. It's contagious.
9.     If time, read from your novel. The audience came to hear you interpret your work.
As I prepare for my book launch and tour, I will take my inspiration from Mira, Delia, Soniah and Patti. Like them, I want my audience to discover the joy that I've found in writing my debut novel, and share in that joy as they read my book. Hopefully, I'll be able to control my nerves when I'm faced with a room of strangers. And hopefully, I'll be as successful, open and honest a speaker as these four women were.